Da Lat is the capital city of Lam Dong province, Vietnam (Dalat or Da Lat) is the City of Flowers and honeymooners with lovely French villas, the fresh air, the beautiful waterfalls and gorgeous lakes sits in a lush and green valley of postcard beauty. Dalat’s specific sights are pine forest (forming the name: “City of thousands of pine trees”) with twisting roads and tree marigold, cherry blossom in the winter. The city’s temperate weather stands in contrast to Vietnam’s otherwise tropical climate. Mist covering the valleys almost year-round leads to its name “City of eternal spring”, Spring is eternal and “unique season” in Da Lat.

It’s also called “Little Paris” (“Le Petit Paris” in French) due to its French architecture villas and its replica of the Eiffel Tower built by the Telephone Company that looks like it fell into a pool of red and white colour. And really, after driving through tea gardens, coffee and rubber plantations, one feels almost transplanted to Europe. Indeed, in the past when Dalat still had been under France, The French Officials want to set up this city as “Le Petit Paris” (A Little Paris), the ideal resort city, the meaningful education center for their life in Indochina, the place was far from their native land – remote France. So, Dalat was the capital of the Federation of Indochina during World War II.

Beside above names, Vietnamese also called Da Lat under many lovely names such as The City of Love, The City of Poetry, The Green City…

Da Lat was developed as a tourist destination after Alexander Yersin, a Swiss scientist with a taste for adventure, trekked 1839 into the region and persuaded the French colonial administration of its value as a highland resort.

Da Lat sits approx. 1500 m (4921 ft) above sea level on the Langbiang Plateau in the southern parts of the Central Highlands, and is surrounded by lovely mountains, according to a local, carry lyrical names like Elephant’s Head and Lady’s Body. So, you do not be surprised when someone called Da Lat as The City in the Forest.

Da Lat is the land of natural richness

Da Lat has been calling as Vietnam’s “vegetable garden” due to its year-round cool weather. Da Lat supplies temperate agriculture products for all over Vietnam. Indeed, Dalat is renowned for its orchids, roses, vegetables, and fruits. There are nascent wine-making and flower-growing industries in the region of Asia (main flower consuming market is Singapore, Hongkong, Korea, Japan). Every 2 years, The National Flower Festival hold in this city with many participants over the world.

Da Lat is the ideal city and the highlight of Vietnam

Da Lat still is the summer retreat of the rich and powerful. The last emperor, Bao Dai King, shared the coolness of hot Vietnamese summers with concubines in his summer palace before he was permanently sent to exile to the French Riviera.

The majority of visitors are Vietnamese. It seems to be the preferred place to get married. Honeymooners spend their memorable day amongst the artificial carved nature around the man-made Paradise Lake (also called Tuyen Lam Lake), shooting photo album and paddling on somewhat kitschy swan boats on the picturesque lake.

As Da Lat was the most romantic place of Vietnam, great natural landscapes. Hence, almost singers of Vietnam and Overseas have highly preferred to shoot their music videos or movies in Da Lat. 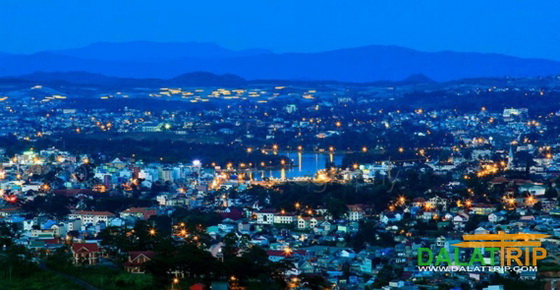